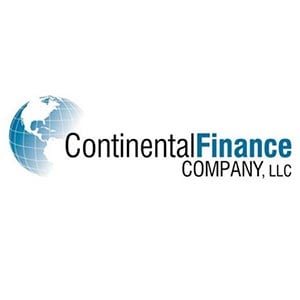 The Continental Finance Verve card is a credit card marketed to applicants who have “less-than-perfect credit.” It is an unsecured credit card, meaning that it does not require a deposit before supplying the cardholder with a line of credit. However, the company may require an applicant to pay a security deposit if the applicant does not qualify for the unsecured version of the card. The Verve card comes with a $500 credit limit (subject to variation depending on creditworthiness) and does not offer an attached rewards or cash back program.

Continental Finance used to offer two credit cards called the Matrix card and the Cerulean card in partnership with Discover, but the company is now a MasterCard partner and only advertises the Verve card on its homepage. The Continental Finance website still includes a login page for Matrix and Cerulean users, but it is unclear whether the company is still issuing copies of these cards.

On February 4, 2015, Continental Finance was ordered by the Consumer Financial Protection Bureau to refund $2.7 million in illegal credit card fees to cardholders and. The CFPB issued a statement announcing this order, a portion of which is excerpted below:

“Continental Finance misled consumers and charged them illegal fees,” said CFPB Director Richard Cordray. “These excessive fees are especially harmful because the cards were targeted to consumers with subprime credit who are often economically vulnerable. We will act to protect people who are wronged in this market.”

The CFPB’s full order can be seen here.

The Verve card charges an annual fee of $125 for the first year of service ($96 for each subsequent year), a $10 monthly fee beginning in the second year, a $30 additional card fee (if applicable), a cash advance fee of $5 or more, a foreign transaction fee of 3%, a late payment fee of up to $38, a returned payment fee of up to $38, and an APR of 29.99% on carried balances. The card may also require a variable security deposit depending on the applicant’s creditworthiness, in which case it would function as a secured credit card. The default credit limit for a Verve card is $500, but users will only have access to an initial credit line of $375 after the first year’s annual fee has been applied.

Continental Finance has a “B” with the BBB and is not accredited at this time. The company has received 200 complaints in the last three years, with 101 of these related to billing and collection and 92 tied to product or service issues. The company has successfully resolved 199 of these complaints, while the remaining complaint was unresolvable due to an inability to contact the complainant. The company also has received two negative informal reviews and one positive informal review. The BBB cites the government action taken against the business as a major factor lowering its rating.

The Continental Finance Verve card has one negative user review on Credit Karma. This review was posted to a page of reviews for the Matrix card, and it awards Verve one out of five stars. Beverly Harzog’s credit card blog also gives the Verve card a negative review overall.

I needed a credit card for an unexpected trip. The first thing they do is bill you $125 processing fee. Then they ask for a payment that day. (You can tell them you are paying on the due date). So I get my statement. My payment is due on the 27th of the month. So I pay my July payment on July 25th, I pay my August payment on August 27th and then I make my September payment on September 3rd. So now I am ready to make my October payment by October 27th. I get an email on October 7th, telling me that my payment is past due and now I owe 105.00. WHAT??? I call them and I am told that because I paid on the September payment on the 2nds, it was processed as an extra August payment and so therefore I am late. So now I still owe September and I owe October and a $35 dollar late fee. She said if I would have paid on September 4th it would have been the September payment. She would not help me but got a supervisor. I got the same runaround and he said he will talk to corporate. So now, although I paid my payment early, I owe late fees, an extra month payment and they are turning me over to credit bureaus as a late pay. I am cutting this card up and paying these loan sharks off ASAP. Don’t do business with them!!

Just wanted to leave some comments for people who are considering obtaining this card.

I have had the card for about 7 months now. I received a preapproval offer in the mail in mid-2014, applied online, and received the card shortly thereafter. I called to activate, and the rep had me set up the first payment over the phone (toward the $125 annual fee), for which there was no additional fee.

I charge one or two things each month, then set up a payment on the card’s website to post by the due date. It takes several days after the payment posts for an equal amount of the credit line to become available again – unlike some card issuers, they’re being quite careful in covering themselves in case your payment bounces.

Otherwise, I’ve had no problems – no extra fees, no cases of the card being declined, no hassles. The card reports accurately to the credit bureaus each month.

If you’re trying to build or rebuild credit, this is not a bad way to go – this may be one of the few cards you can qualify for without a full security deposit, and as long as you pay on time each month, it will help your score. I recommend leaving a small balance ($20 or so) on the card at the close of each cycle to help with the utilization part of your score.

Once your score has improved enough to qualify for something better, you can close this card and escape the high annual fee.

I can’t say anything about credit line increases – I haven’t seen one yet, after 7 months of on-time payments, but I also haven’t asked for one.

Like the First Premier credit card, the Verve card is a less-than-ideal credit repair option for most applicants who have bad credit. It carries high annual and monthly fees and charges an APR that is much higher than industry averages. Cardholders on strict budgets could easily find themselves mired in fees if they miss even one payment with this card, and there are many better secured options out there with similarly low credit requirements.

There’s also the matter of the government action taken against Continental Finance. The fact that the company has incurred large punitive fines for inappropriately charging its customers is a major red flag that would make any card look bad. But when the card already looks bad on its own terms? Our opinion is that it is best to stay away from the Verve card completely.

Have you used a Verve credit card? Tell us about your experience in the comment section below: